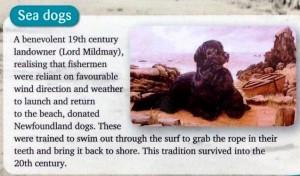 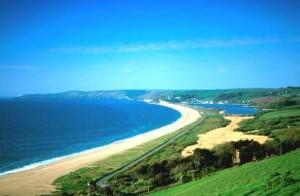 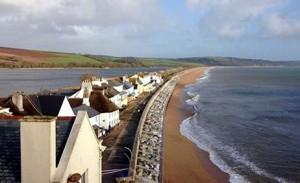 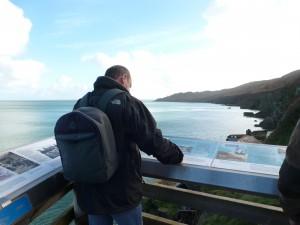 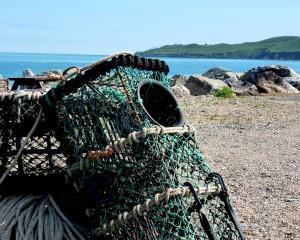 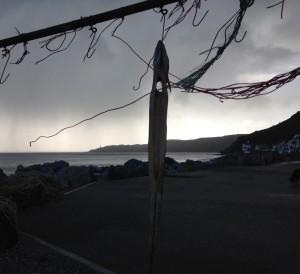 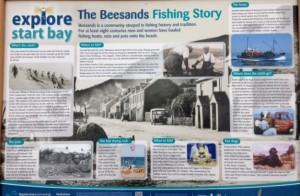 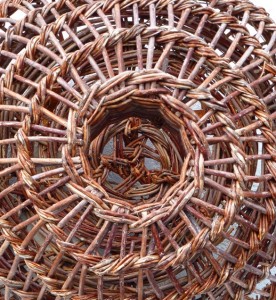 When Julie Hinder came across a paragraph in her ‘Guide to Devonshire’ about Newfoundland dogs being trained to swim out and retrieve boats in rough weather at Torcross, she just had to find out more . . .

It turns out that this practice was just a part of life in the Start Bay villages of Beesands and Hallsands; not a great surprise if you’ve seen footage of the severe storms which bash this part of the South Hams coastline regularly throughout the Winter.

Fishing, especially large catches of Mackerel and Pilchards (or Sardines as we now call them), used to be the prime occupation and, out of necessity, it would be a whole-village event with women, children and dogs taking part!

Boats would take seine nets out to sea and a look-out would be posted. When the tell-tale oily film appeared on top of the water he would call “Aye Boat!” and wave his special bowler hat! The purse seine nets would surround the fish and both ends of the net were dragged ashore with the fish inside them. A heavy manual job, especially in rough weather.

The dogs were trained to drag the boats up above to the high tide mark and their role was considered to be “as essential to the fisherman here as the sheep-dog is to the farmer; and they are, we believe, like them, exempt from the dog tax.” So the sheer strength and bravery of these dogs must have been  absolutely essential for the fishermen to be able to earn their livelihood.

There are a number of mentions about these dogs in 19th and 20th century books and articles, even as far away as The Register in Australia:

“August 22nd 1922: Torcross, away down south. The Newfoundland dogs kept by the fishermen deserve a word. When the surf is too rough for boats to approach the shore for the casting and catching of a rope these dogs, at a word, plunge in and perform the service of catching the cable and bringing it ashore.”

As well as their day-to-day heroism, the dogs were reported to be literal life-savers. Before Hallsands was abandoned, a fisherman recounted:

“a dog was sitting up on the cliff above the quarry, and all at once he pricks up his ears, and cuts away right into the sea of his own accord, and brings out a little drowning child. He begins licking her face, but there was no sign of life, so he thinks to his self, ʻwhatʼs to be done next? I canʼt bring her to?ʼ So away he goes to the nearest cottage, and pulls the peopleʼs clothes to attract their attention. Guided by the dog, they soon brought in the poor child, and the means used were successful in restoring animation.”

The best of the catch was sent by train along the Primrose Line to London. The by-catch would be used as bait for the crabbing. Willow withies, harvested from the freshwater lagoon at Slapton Ley behind Torcross, would be shaped into crab pots.  As crabbing was a year-round job, the Newfoundland dogs really come into their own during winter storms when the Start Bay beaches would be lashed by easterly gales.

Start Bay is filled with sea and fishing history. If you walk along the South West Coast Path, which skirts the edge of the Bay, you’ll find the storyboard and viewpoint of the lost village of South Hallsands. And if you look over the fields and gaze out over Start Bay you will see the buoys that mark where the crab pots of today are sunk. At Beesands crab pots are stacked on the shore and bait is hung up to dry by the local fishermen. Although the Sardines and Mackerel in numbers have long gone, crab fishing continues today by a family fishing business at Beesands.

The Start Bay area still retains the tradition of being an incredibly dog-friendly place, with our canine companions enjoying the beaches all year round, swimming in the sea like the Sea Dogs. They are warmly welcomed at many of the pubs and cafes in the area.

Bring your dog for a dog-friendly holiday to Start Bay. Stay in cosy cottages with woodburners and a private valley for walkies on site at Dittiscombe Holiday Cottages, near Slapton and Torcross. Special thanks to the Cookworthy Museum in Kingsbridge who kindly helped with research for this blog. Open from March 2017, the museum shows how the people of the area have lived, worked and played over many generations. £3.50 for adults, free for children under 16 years.

In 1902, a writer reminisced about “the presence of such dogs [in Hallsands] thirty and forty years ago as well as in more recent days. Fine fellows they were; not the black “Newfoundlands” of Torcross, but yellow creatures that could do fine work among the breakers. ”

The Secret World of a Devon Hedgerow

A dog friendly welcome to South Devon!
Scroll to top
This website uses cookies to improve your experience. We'll assume you're ok with this, but you can opt-out if you wish.Accept Read More
Cookies Policy
Translate »